Blog - Latest News
You are here: Home / IS IT TIME TO REPAIR OR REPLACE YOUR AIR CONDITIONER?

Check these factors before deciding whether its time to

Replace or Repair your Air Conditioner 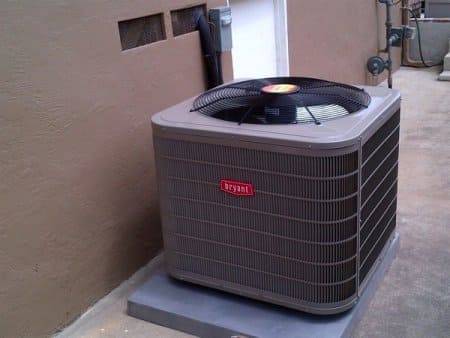 A/C pros say you should consider age and the frequency of repairs.

Multiply the age of the equipment by the repair cost, and if that exceeds $5,000, then replace the unit. If less, go ahead and repair it.

Consider the age of your A/C

The age of the heating and cooling unit plays a critical factor in the decision to repair or replace.

R-22 can influence your options

If an A/C unit requires additional refrigerant  — it signals there’s a coolant leak.

Topping off a system with R-22 refrigerant, known as Freon, costs as much as $70 to more than $175 per pound — which may also include the cost of the service call. Fixing the leak and putting in several pounds of refrigerant can cost $550 to $1,000, HVAC pros say.

“A unit that takes R-22 that develops a leak should probably be replaced,” experts says. “Once you get a leak, the compressor (which can cost up to $2,000) will usually go out eventually.”

Repairing a leak, adding refrigerant and replacing a compressor can cost about the same as buying a new, low-end unit.

R-22 prices, meanwhile, have soared in recent years due to the EPA’s eventual phaseout. HVAC manufacturers stopped making units “charged” with R-22 in 2010. Production of R-22 will end 2020.

R-410A, a more environmentally friendly refrigerant, will replace it.

Other factors affecting the repair/replace decision

Aside from the unit’s age, a few other signs can signal it’s time to replace your air conditioner, according to Energy Star. Consider how frequently you make repairs, whether your energy bills are rising or if your home is too hot in the summer.

How long are you going to live in the house, and what are your utilities like? If the unit is older and the repair is a couple hundred dollars, it may not be worth fixing.

If you do buy a new, energy efficient Air Conditioner – which costs $3,900 to $11,200 – Energy Star estimates a 20 percent savings on heating and cooling costs.

On the other hand, some HVAC technicians say if it’s not broken, don’t fix it. If your system shows no leaks and your energy bills are low, Hamlin sees no reason to replace it.

To gauge the condition of your existing A/C, schedule an inspection with an Edwards Air Technician to get a true Diagnosis of your system.

The Phase-Out of R22